This month again we have two runners-up. In no particular order, as always, they are Levant Tin Mine Stack by Joyce Macadam: 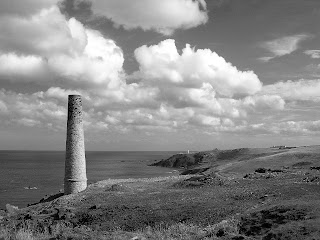 The placement of the stack in the composition is what is important here. There is always something poignant, I think, about ruins by the sea, such as the pollarded columns of Roman temples that can be seen at various places on the coast in Libya. In fact this particular mine went nearly two miles out under the sea, according to Wikipedia, so the impression that the stack is somehow stranded on the coast is misleading: it is really an example of engineering ingenuity.

Talking of great engineering, our other runner-up photo was The 4.50 from Paddington by Richardr. 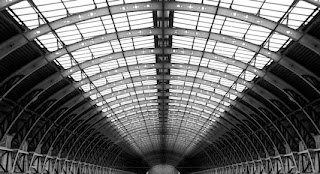 Richardr captures the elegance as well as the grandeur of Brunel's great structure, and reanimates the cliche that such buildings were the cathedrals of their age. Personally, this picture reminds me happily of one of my favourite novels, Austerlitz by WG Sebald (named not for the battle but for the Parisian station). Sebald habitually used photographs in his fiction - although grainy ones that he degraded by photocopying them, rather than the pellucid image that Richardr has achieved here.

Our winner this month is Ouse Bridge from Skeldergate Bridge by woodytyke: 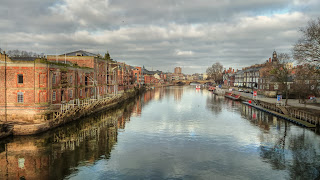 What the judges particularly admired about this picture was the light (the reflection of the white rails on the left is like a Sisley painting) as well as the splendid panorama. There is a tremendous amount of historical information in this picture, and I can imagine a future historian finding it a rich source. The photographs in the Royal Commission on Historical Monuments series provide an important historical record (supplemented by expert commentary and drawn plans) but the many photographs being taken now, attested in a small way by the BHO Flickr group, will provide far more detailed evidence.

As I announced on the group page, we're going to run together November and December and pick a winner in January. The reason for this is that in December no one will be in the office with the technical savvy to be able to upload a winning picture to the homepage. But please do keep adding your photos to the group!
Posted by Jonathan Blaney at 12:55