For this month's competition the voting among my colleagues gave us a shortlist of three. In no particular order the two runners-up were:

Tudor Barlow's picture of the cloisters at Gloucester Cathedral 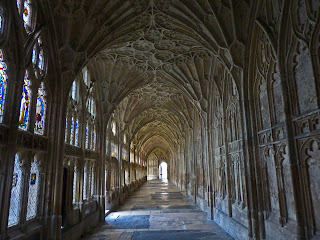 This will be a familiar setting to many but the light in this photograph is evocative. The bright light of the open doorway at the end of the cloisters conveys just the numinous effect that Gothic architecture, presumably, aspires to achieve.

Our other runner up was Disused Slate Mine by stephen bolton1. A photo which I find gritty and melancholy but also eerie - or, if you like, earthy and unearthly at the same time.

After discussion, however, we chose as our winner, Little Moreton Hall by alan tunnicliffe 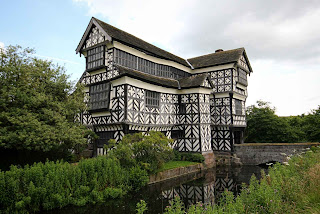 Like Gloucester Cathedral, this a well known setting, but the photograph is quite unsentimental, perhaps because of the tripartite sky: part lowering, part blue and part irradiated. The context of the house seems to be in harmony with the building, both being somewhat overgrown and chaotic.

Everyone is welcome to add their photos the the British History Online group on Flickr. We are picking our favourite every month in order to celebrate our 10th anniversary. The winning photo will, with permission, appear on the BHO homepage.
Posted by Jonathan Blaney at 17:15